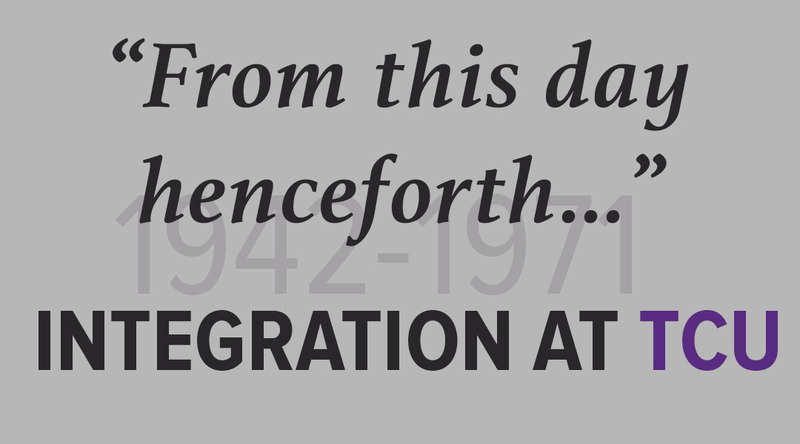 In 1954, the Supreme Court ruled in Brown v. Board of Education that segregation in public schools was unconstitutional.  In the early 1960s, with the Civil Rights Movement gaining momentum, the enrollment of African-Americans at Ole Miss and the University of Alabama led to outbreaks of violence that captured national attention.  Meanwhile in Texas, African American students had been attending ten HBCUs, among them Paul Quinn College, Wiley College, Prairie View A&M, Jarvis Christian College, and Texas Southern University.  In the early 1960s, public universities in the state began to enroll Black students, students who paved the way for those to follow.

TCU made the transition to an integrated campus in stages.  Beginning in the 1940s, TCU allowed African American students to register for select classes.  Then in 1952, Brite College of the Bible enrolled three African American students for degrees.  By the early 1960s, TCU administrators acknowledged that college integration was an issue they had to take steps to address. This online exhibits explores TCU's steps toward integration, and the early years for Black students on campus.