"In all of sports, there's only one Horned Frog" 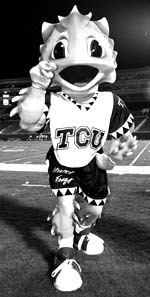 Superfrog from the Daily Skiff

In 1897, TCU students and school officials adopted “Horned Frog” as the title for the student yearbook, and the lizard was soon embraced as the school mascot.  The original Frog mascot made its debut at the opening game of the 1949 football season. The TCU student body had repeatedly called for a mascot that could actually participate in half-time activities during football games. The Daily Skiff reported that the new costume would be “complete with horns, scales, and ridges,” with “space inside for a human being.” The original mascot, a six-foot tall purple creature known as “Addie the Fighting Frog,” was named after Addison Clark, Jr., who promoted intercollegiate athletics during the early years of the University.

As TCU students developed various costumed characters in the decades since 1949, the Horned Frog mascot has undergone many transformations.  In 1979, TCU athletic promotions director John Grace created SuperFrog. He wanted a mascot “which people could laugh with, instead of laughing at.” The most recent version of the SuperFrog costume was unveiled in 1999. The new Frog sported a more muscular physique and new clothes with numerous foam horns. The formally droopy eyes were replaced with a more focused look. The Daily Skiff reported that the new Frog was tougher and intimidating. An air-conditioned vest was a welcomed addition for students inside the suit.

In addition to rousing fans at TCU sporting events, SuperFrog is often on hand for charity and promotional events. 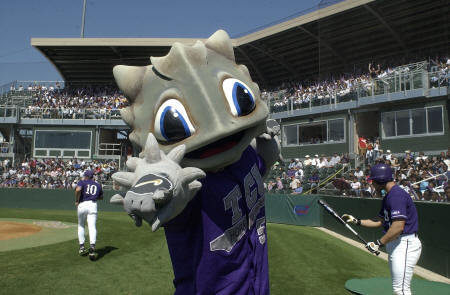