A Steve Knight Flying Story: The Mystery of the Devil’s Hand by Ted Copp (1941) 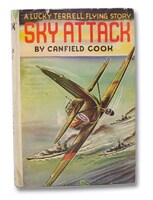 Due to the post-war high coming out of World War II and the creation of a separate Air Force in 1947, aviation was a very popular subject around young men. These stories served a duel function as they fueled interest of young men to join the service and also venerate the function of the military.

After World War II, all of America was looking at their lives in a new light. This new sense of hope and freedom lead to a boom in the futuristic movement. In conjunction with fledging discussions about the impending space race, stories about what the world would like in 100s or 1000s of years grew in popularity. These stories include people on different planets, increased technology and what creature comforts still existed from the time period of their creation.

A Tom Quest Adventure: The Secret of Thunder Mountain by Fran Striker (1952)

The Ken Holt Mystery Stories: The Riddle of the Stone Elephant by Bruce Campbell (1949)

While technology continued to revolutionize the lives of the modern young boy in the 1930s to the 1950s, the romance of the old west or discovering and explored parcel of land still held their attention. Many stories describing a rough band of outlaws, living off the land or otherwise living a life opposite of a suburban teen continued to inspire youths and pay their authors well.

While these characters were created in a day and age when males were supposed to be breadwinners for their families and utterly exude machismo, these characters can still be good role models for anyone who reads these series. These young men rely on those around them in order to achieve their goals and try to find a solution for whatever stands in their way instead or circumventing the issue; they prove that fortitude and hard work get results.