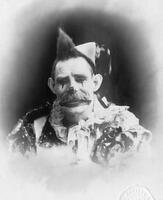 Richard Bell was born in Deepfield, near London, in 1858. The son of James Bell from Scotland and Emily Guest from Ireland, he made his debut in France when he was three, and performed in Switzerland, Germany, Russia, Belgium, and Spain in the next few years. In 1868, the Bell Brothers—Jim, Jack, Jerry, and Dick (as Richard was called)—moved to the United States. Then, they went to Mexico as the new equestrian acrobats of the great Chiarini circus, which had introduced the English-type clown to the Mexican audience only two years before: baggy pants, a face made-up with flour, and a red wig with three curls on the forehead.

What happened to Richard's parents is unknown. Jim and Jack, the older brothers, died tragically on their way to South America, leaving Jerry and Richard pretty much on their own. Jerry found work with a circus. Thirteen-year-old Richard was able to find a job in Lima, Peru, first as a horse trainer for the British ambassador and then as an equestrian acrobat in a local circus. While on tour in Santiago, Chile, Richard married the Catalan Francisca Peyres in 1876, whom he had previously met in Lima.

After a turbulent trip, including a shipwreck in the Caribbean Sea, the couple managed to reach the United States in 1879. Richard performed in cities such as New York, Philadelphia, and Saint Louis. In Havana, Cuba, he met the Orrín brothers, whose Metropolitan Circus had been operating in Mexico since 1881. The Orríns were very impressed with Richard’s talent and hired him. Having already started a family, Richard and Francisca could finally settle in Mexico City in 1885.