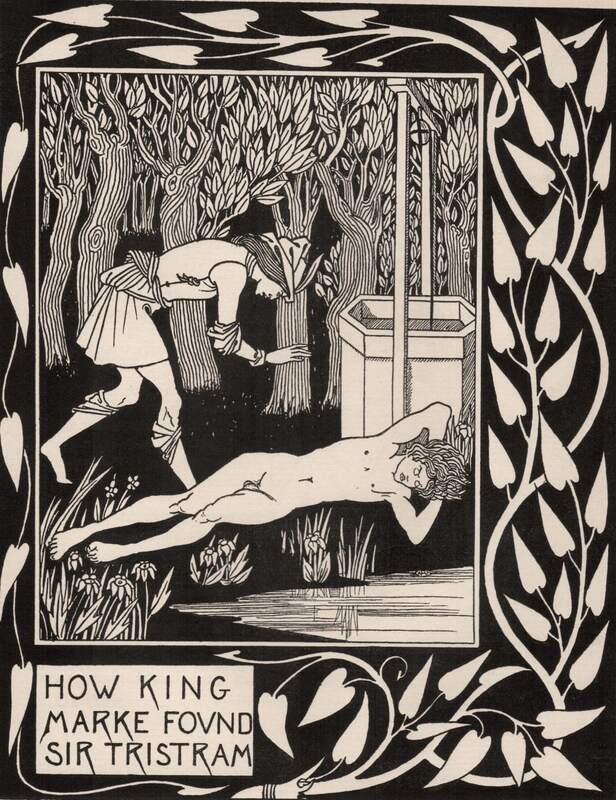 "How King Mark Found Sir Tristram" was sketched by Aubrey Beardsley for 1894 edition of Malory's Morte D' Authur. The illustration, done in classical style, demonstrates Beardsley's interest in eroticized beauty and ambivalent sexuality. The nude figure of Sir Tristam has been painted in the odalisque pose, one of the motifs that the proponents of Art-Nouveau borrowed from Oriental paintings. The odalisque pose, conventionally used to portray female nudes, and the Medusa-like locks, give the knight a seductive and androgynous appearance.King Mark's voyeuristic gaze directed at the sensual body of the sleeping knight, rendered as an object-d'-art, is homoerotically charged. The Decadent illustration, therefore, perversely subverts the heteronormative premise of the love triangle that plays out between Tristan, Isolde, and Mark in Malory's text. 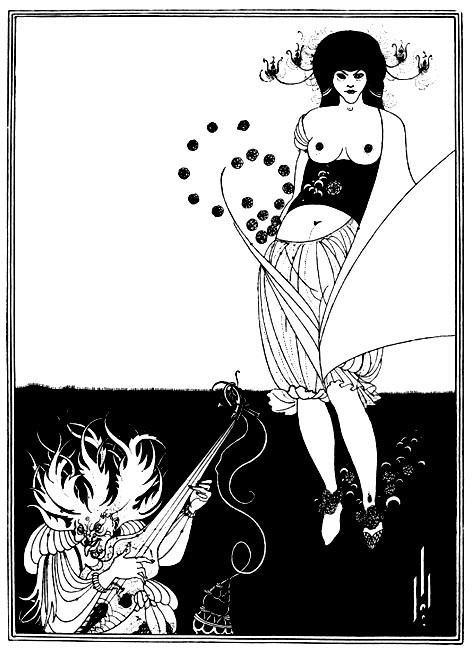 Aubrey Beardsley's illustration of "The Stomach Dance" depicts Oscar Wilde’s Salomé performing the Dance of the Seven Veils. The Middle-Eastern veiled belly dance, usually performed by dancing girls as well as dancing boys, who appear indistinguishable from the girls, in itself threatens the Western gaze with their ambiguous gender expression. Salomé’s character has often been interpreted as a male transvestite, thus engendering the threat of male homosexuality. In Beardsley’s illustration, Salomé's erotic movements are conveyed through the swirling of her dress, and captured in the sensually curved androgynous body of the exoticized oriental dancer. Her transgressive sexuality oozes out of her unveiled body, that exposes the breasts and stomach. A grotesque figure wearing clothes sporting phallic designs accompanies Salomé by playing a presumably oriental stringed instrument. The instrument resembles to certain extent the erhu, the sitar, and the violin, thus further revealing Beardsley’s tendency of essentializing the markedly distinct Oriental cultures.

Salomé's peacock feather headdress, and the roses floating around her constitute examples of Beardsley's Japonisme, characterizing all his Salomé illustrations. It further emphasizes his Orientalist vision, which is both at odds, and commensurate with, Wilde’s own Decadent Orientalism. The femme fatale's dangerous sexuality, coupled with her ambiguous gender expression, threatens the Victorian heteropatriarchal social order with its unbridled queerness. 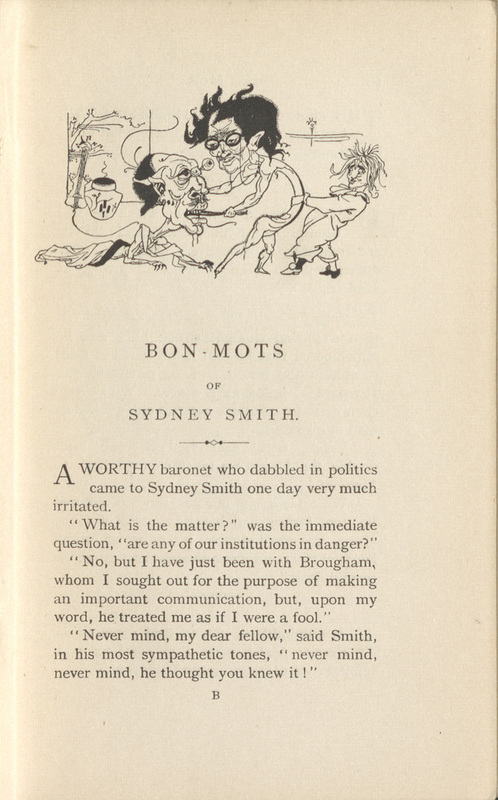 Aubrey Beardsley, "Grotesques," J.M. Dent, 1894. One of the several illustrations that Beardsley defined as "Grotesques" influenced by the nineteenth-century artistic and aesthetic phenomenon of Japonisme.

The vignette depicts the deformed and concave figure of a dentist bolstered by his assistant as he pries a tooth from the crawling patient. This satirical visualization of fear captures Beardsley’s idea of the grotesque. While the sharp profile of the dentist shows he is already unclad, the sketch focusses on the ongoing disrobing of the patient vaguely draped in Japanese clothing as he suffers in the forceful action of push and pull. The illustrator’s use of contrasting black and white colors—a prominent art style in Hokusai’s Manga—to detail the obi belt coming undone around the patient’s waist reveals the sensuous and homoerotic undertones of the sketch.