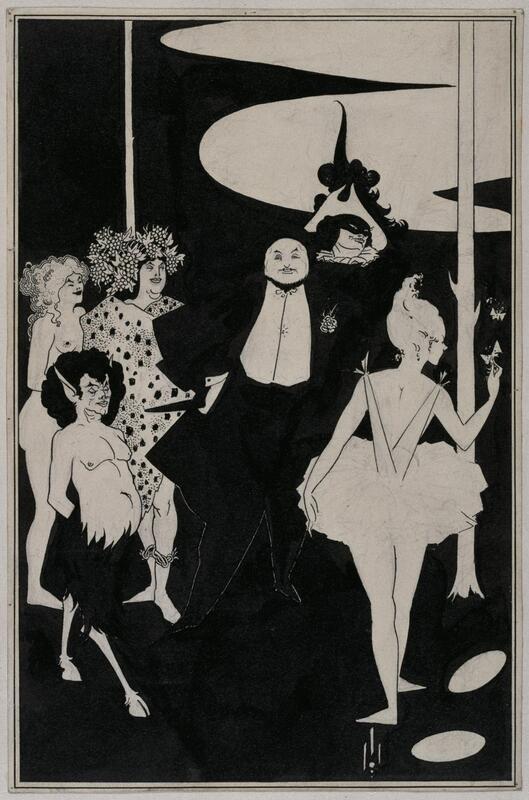 The design for "Frontispiece to 'Plays' by John Davidson," undertaken by Aubrey Beardsley in 1894, presents a caricature of some noted figures associated with the Decadent Movement in the Art Nouveau style. The illustration embodies the central tenets of the Decadent Movement, namely Hellenism, Orientalism, grotesquerie, humor, and self-parody. It makes use of Japonisme-inspired black and white forms attesting to Art Nouveau's Oriental influences. In the figure of Bacchus, Beardsley paradoxically uses a grotesquerie to represent a classical god. The masked figure blending with the background indicates self-performance, a theme common in Decadent art. The faun, a personal favorite of Beardsley, is symbolic of male eroticism; likewise, the Bacchante represents uninhibited female sexuality. These diverse and grotesque caricatures lend a carnivalesque quality to the illustration. 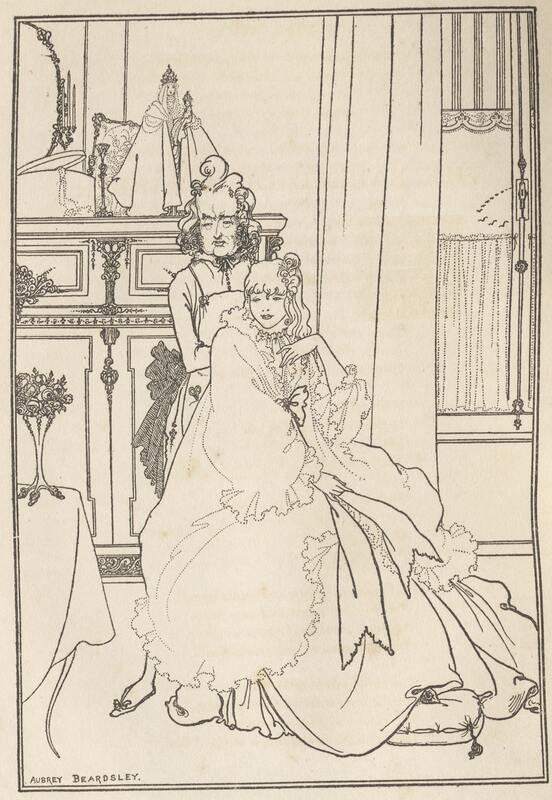 Aubrey Beardsley’s illustration of “The Ballad of a Barber”’ aestheticizes the ambiguous moment of imminent disaster: a deceptively serene juncture before the indulgent barber, Carrousel, murders the thirteen-year-old Princess. Carrousel’s grotesque, elfish figure embodies the nineteenth-century dehumanization of criminals and the working class. Whatever provokes the demonic barber to kill the beautiful young girl remains hidden in the sketch. This invisible force that prompts the consummation of the desired object queers the illustration by extending the drawing beyond its visual frame. 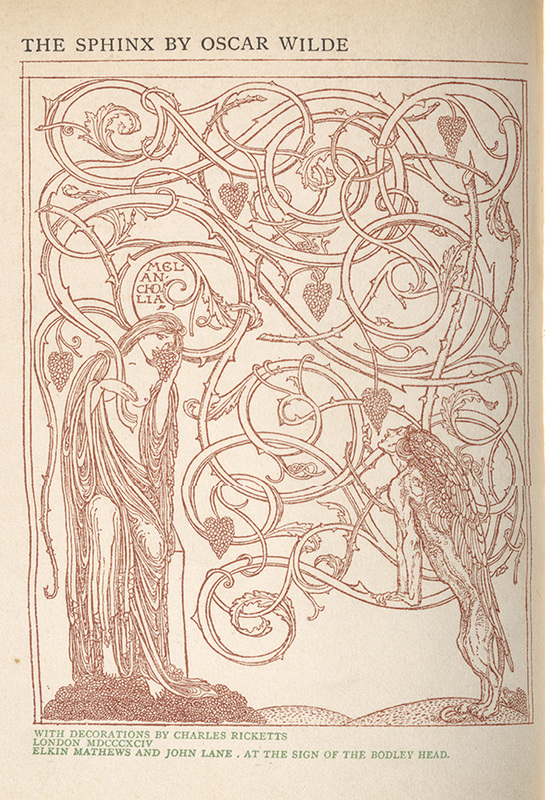 Originally published in 1894, Oscar Wilde’s The Sphinx has been called “the epitome of the [D]ecadent movement in England,” a status due in part to Charles Ricketts’s masterful illustrations.¹ Wilde and Ricketts worked closely throughout their respective careers, with Ricketts’s work being featured in the 1891 revision of The Picture of Dorian Gray and the 1892 publication of Poems, among others.

Ricketts’s illustrations included in The Sphinx emphasize the poem’s focus on eroticizing the unfamiliar; on the title page, twisting, fruitful vines fill the space and twine around two contrasting figures—a partially nude woman and a grotesque sphinx. The woman, draped in robes except for her breasts, holds a piece of fruit to her mouth as if to take a bite as the sphinx mirrors her actions, front paws braced on a branch to get closer to the fruit overhead. The sensual focus on consumption alludes to their mutual indulgence in perverse desires, speaking to the intertwining relationship between beauty and the grotesque.

Aubrey Beardsley's illustration "The Mysterious Rose Garden," featured in the January 1895 issue of The Yellow Book.

Audrey Beardsley’s “The Mysterious Rose Garden” was published in the January 1895 volume The Yellow Book, a publication that deliberately forced Decadent art and literature to the public consciousness. The illustration features an androgynous figure leaning in and whispering to a fully nude woman in a rose garden in the cover of the night. Beardsley’s trademark black and white contrasting print signals his fascination with Japanese aesthetics. Deliberately queering the scene of Mary's Annunciation, Beardsley distorts the chaste encounter, turning it into a moment of seduction with oozing sexual potential. With unbound hair, robes that end in flames, and winged shoes, the angel is transformed into a seductive tempter intending to taint Mary’s innocence. Mirrored by the floral backdrop, the flowers at Mary’s feet hint towards her complicity in her own symbolic deflowering. 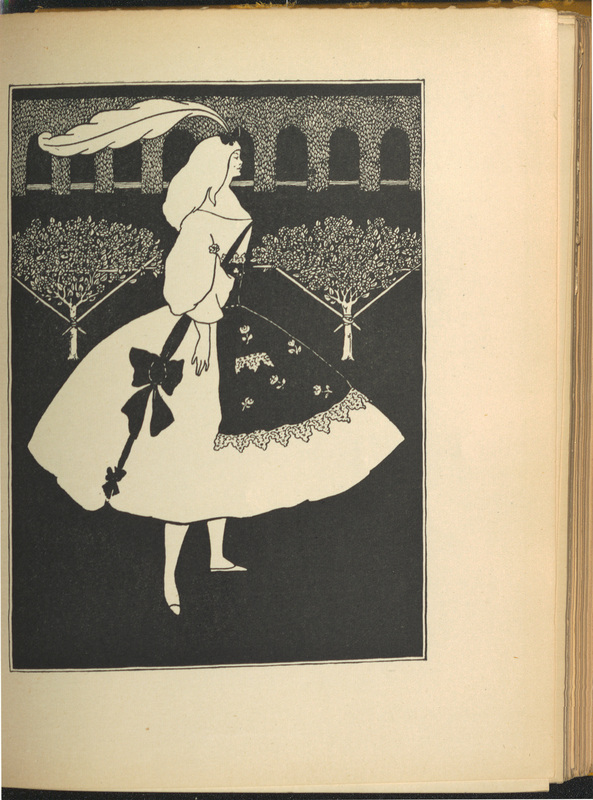 “The Slippers of Cinderella,” despite the title, places no emphasis on her shoes. Beardsley dwarfs the girl with her ample skirts and uses detail to draw the eye to the upper half. Even the restrained trees in the background reflect Cinderella’s ability to explore and go to the ball, but only under specific rules. The note which accompanies the illustration claims that her sister poisons her with the powdered glass from the slippers. Though the slippers are her downfall, they have a minuscule impact on the image. Beardsley hides any danger behind the decadence of her clothes and the garden.

The illustration queers the well-loved story in a uniquely Decadent way: changing the happily-ever-after tale, the caption forces the viewer to contend with a darkened version.