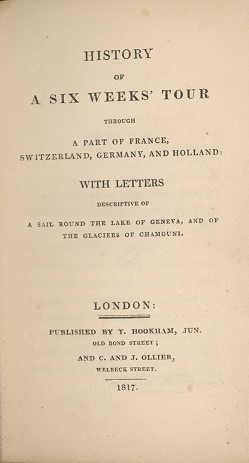 Mary Wollstonecraft Shelley was an English writer with many diverse publications, including novels, travel journals, essays, and dramas.  The daughter of two political philosophers, she grew up in an intellectually stimulating household which encouraged her writing.  At the age of sixteen, she caused a scandal by running off with her future husband and writer, Percy Bysshe Shelley. It was during this time that she began writing novels.

During their travels, Mary worked on a travel journal entitled History of A Six Weeks' Tour.  More than just an account of their travels, this work contained many political opinions including those on the French Revolution.  Being primarily written by a woman, this travel journal displayed characteristics and opinions that would have been considered unbefitting of the author.