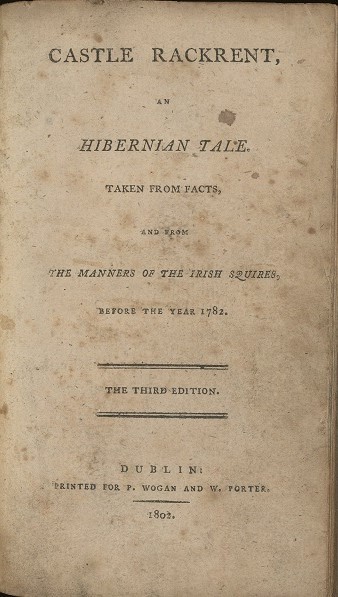 Maria Edgeworth was an Anglo-Irish novelist of the early nineteenth century.  In addition to being a female author, Edgeworth expressed strong political ideals, another unfeminine trait for her time.  She had long contributed to different work of her father's, where she was able to practice her skills in writing as well as develop her political thoughts.  Her first independent work was a novel entitled Castle Rackrent which was published anonymously in 1800. Though he was supportive of her writing, it is believed that she published anonymously largely to avoid the editing of her father.

Castle Rackrent was published during a sensitive time for the Irish, as the Act of Union of 1801 (uniting Ireland with Great Britain) was to be implemented the following year.  Her novel closely aligns with the issue of Anglo-Irish landlords mismanaging estates, and some even say she presents a plausible solution.  Special Collections' third edition copy of Castle Rackrent exhibits her political passions in her novel's Forward and Glossary, both of which were added last minute.

Castle Rackrent was an Irish tale accommodating the Irish with words from their own folklore and language.  To make evident her political affiliation, Edgeworth added a forward in an English voice in order to keep from seemingly opposing British intentions of union.  Similarly, she added the Glossary to accommodate English readers with little knowledge of Irish writing.

Edgeworth was also closely acquainted with Scottish author Sir Walter Scott, who also published anonymously.  In his case, anonymity was used to avoid public scrutiny over his experimental works. In our first edition copy of his novel Waverly, Scott praises Edgeworth's work, saying that he wishes to "emulate the admirable Irish portraits drawn by Miss Edgeworth."