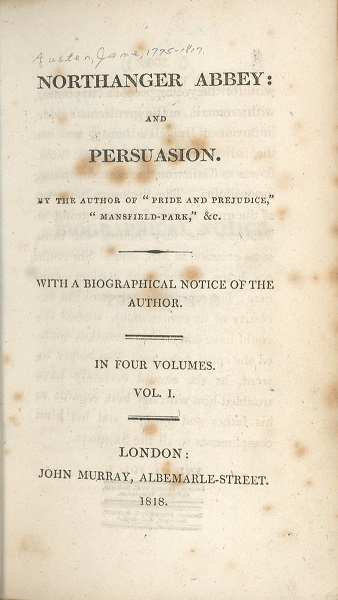 Jane Austen was an English novelist in the early 19th century with six major published works. Though her novels are now regarded as being among the best of all time, she was never recognized for her writing accomplishments during her lifetime.

Our collection includes copies of each of her novels, including first editions of Pride and Prejudice, Mansfield Park, Emma, Northanger Abbey, and Persuasion.

Northanger Abbey, Austen's last novel to be published posthumously in 1817, was also her first work to be sold to a publisher in 1803. Special Collection's first-edition copy contains a "Biographical Notice" by Austen's brother, Henry Austen, which reveals the author's identity for the first time.  His phrasing suggests that had Austen revealed her identity during her lifetime, her works may have been viewed with uncertainty or perhaps even contemptuously.

“When the public, which has not been insensible to the merits of “Sense and Sensibility,” Pride and Prejudice,” “Mansfield Park,” and “Emma,” shall be informed that the hand that guided the pen is now mouldering in the grave, perhaps a brief account of Jane Austen will be read with a kindlier sentiment than simple curiosity.” 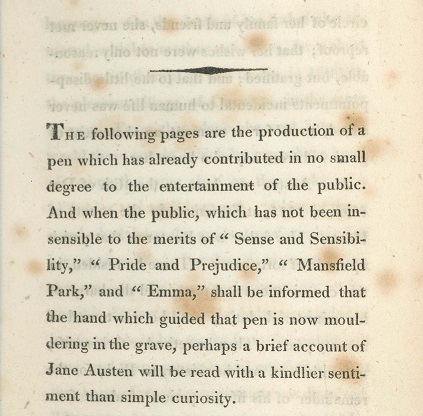