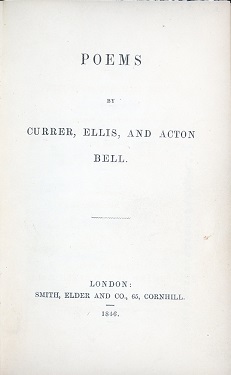 Emily Brontë was the middle child of the Brontë sisters.  Her first and only novel, Wuthering Heights, was published the year before her death in 1848.  Though it was received with general dislike due to its unusually dismal theme, Wuthering Heights is now considered to be among the best of 19th-century literature.

Like her sister Anne, Emily was very fond of reading and writing poetry.  She contributed greatly to the collaborative work Poems, published under each sister's "Bell" pseudonym.  Emily also wrote several poems that were published posthumously.

Special Collections' works by Emily Brontë include Poems and many other publications of her personal poems and essays.  Her novel Wuthering Heights published together with her sister Anne's Agnes Grey is among our set, Brontë's Life and Works, which contains the forward written by Charlotte revealing their identities as the Brontë sisters.