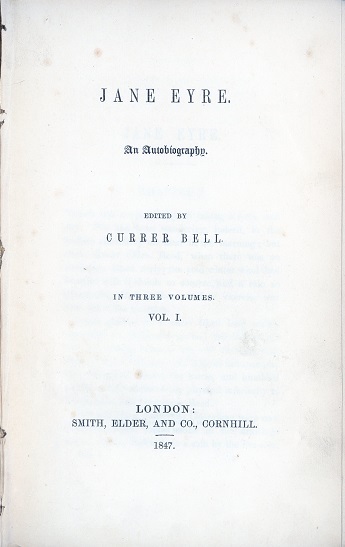 Charlotte Brontë, the eldest of the Brontë sisters, was perhaps the most successful of the three sisters contemporarily.  After publishing their collective Poems, Charlotte went on to publish Jane Eyre, which, unlike her sisters' independent works, was an immediate success.

Charlotte Brontë's success in publishing may have influenced the American publishing of her sister Emily Brontë's novel, Wuthering Heights.  The first American edition can be found to be published under the name "Charlotte Brontë," instead of that of her sister Emily.  This tactic created a positive bias toward Wuthering Heights since Jane Eyre was already a well-known success.

Shortly after her sisters' deaths in 1848 and 1849 of tuberculosis, Charlotte wrote a forward for the second edition of Emily's Wuthering Heights and Anne's Agnes Grey (published collectively in one volume).  In this forward, Charlotte reveals their identities while supporting their decision to use pen names due to the existing social prejudice:

"Averse to personal publicity, we veiled our own names under those of Currer, Ellis, and Acton Bell; the ambiguous choice being dictated by a sort of conscientious scruple at assuming Christian names positively masculine, while we did not like to declare ourselves women, because — without at that time suspecting that our mode of writing and thinking was not what is called 'feminine' — we had a vague impression that authoresses are liable to be looked on with prejudice."